‘Everything is in constant flux, from state to state...only in transmutation, perpetual motion, lies truth.’ , Asger Jorn

The paintings of Annette Holzwarth belong within the tradition of Western abstraction: they also develop a key, central, feature of that tradition; an aspect that the mainstream of scholarship on the subject has preferred to consign to the margins. In the standard art historical accounts of the genealogy of abstraction it is considered mainly in terms of its lineage from previous art movements, principally Cubism and Synthetism (in particular Paul Serusier’s ‘The Talisman’ of 1888). The philosophical positions of its three canonical founders, Wassily Kandinsky, Piet Mondrian and Vladimir Malevich, are, of course, mentioned, but they have not been given due weight, possibly because they are associated with beliefs and values quite alien to the minds of contemporary academics. All three were, in varying degrees, mystics. In the case of Kandinsky, his involvement in the Western esotericism of Theosophy, with its blend of Hermeticism, Spiritualism, Kabbalah, Gnosticism, and much else besides, is impossible to overlook, because it is made plain in his book, ‘Concerning the Spiritual in Art’ (1912). What is perhaps less well known is that throughout his life Mondrian was an adherent of Rudolph Steiner’s offshoot movement, Anthroposophy, and saw his work as a direct outcome of its principles. And, even less well appreciated, the intellectual climate in which Malevich developed his ‘Suprematism’ was also suffused with modern mysticism, most especially the beliefs associated with the Greek/Armenian mystic Gurdjieff and his Russian disciple, the mathematician and esotericist Pyotr Ouspenksy. For all these painters ‘abstraction’ is not, strictly speaking, non-representational – rather it represents the principles and entities of an invisible plane or dimension.

Annette Holzwarth’s work shares these concerns, but there is no stylistic influence. Rather, her painting’s relation to that almost forgotten spiritual dimension of abstraction is evident in her unusual choices of media, and in unique working practices of her own devising. Take, for example, any work from the series of nine paintings entitled ‘still in the ether’ (2017). Here we may note, first of all, that the pictorial language she deploys is not geometric or symbolic, but emphatically physical. Gestural. This is resolutely painterly painting. Multi-coloured whorls and swirls of thick paint are discernible through a final veil or fog of white (think of de Kooning’s ‘slipping glimpse’).

The image is at once one of liberation, of disinhibition, and of a deep, occult, order. The tradition it invokes is one in which painting is not simply a practice, but an act, a kind of invocation. The painter extemporises, like a musician – unconventional techniques, tools and materials are employed (think of Pollock using sticks or his bare hands to paint with, and, for media, using pebbles and sand and so on as well as paint).

There is a substrate of convention here, with orthodox materials like acrylic paint being applied to an orthodox support – a stretched canvas. But then Holzwarth departs, strikingly, from these conventions, most significantly in her use of crystals. She uses crystals both as painting tools, instead of brushes and pallet knives, pushing the paint around the picture plane with a large lump of quartz in her fist, and as a medium, grinding quartz and other crystals to mix with the paint. This gives the paint a grainy, mineral, surface which acts as a counterpoint to the free-flowing liquidity of the paint.

The quartz, with its density, and its weight, is emphatically corporeal, physically present, but it carries a tremendous weight of cultural and spiritual redolence too. Quartz, an abundant mineral, and one which takes a great variety of forms – Rose; Amethyst; Citrine; Dumortierite; Prasiolite; Blue – has been used, worked and worshipped, in cultures all over the world. It has been identified as the mystical substance ‘maban’ in Aboriginal mythology. It is to be found in pre-Christian tombs across Europe, such as Carrowmore in Ireland. And, besides this religious or ritual significance, quartz has been valued for its beauty, made in to jewellery, and for its utility, used in pre-historic tools and in 20th century electronics. This multiplicity of meanings and functions is also behind Holzwarth’s attachment to quartz. It is a hand-held tool, like an early flint implement, and it is a numinous substance, a substance that she feels can assist her access to that ineffable realm or plane from which creativity seems to flow. (It also reflects a preoccupation with the Venetian masters, particularly Paolo Veronese, and their near-alchemical transmutation of the mineral base-matter of pigments, grinding and mixing.)

It is actually not uncommon for an artist to feel that the source of their creativity is, somehow, elsewhere – to feel, on completion of an art work, that it wasn’t really you who did it. That you yourself were not the source of the work of art, only the conduit of its parturition. You don’t even need to be an artist to have that feeling. You have a great idea, out of the blue, or kick a ball with surprising accuracy, or whatever, and you think: ‘Well, I wonder where that came from?’. And, in a way, it doesn’t matter what you choose to call it – the unconscious; the ether; the absolute; inspiration; serendipity; Lady Luck.

Nor does it matter how you find you may access it, whatever ‘it’ is – a hot bath, a walk, a prayer, a ritual. What matters is the outcome – What we invoke in the invocation.

Holzwarth explicitly references another thread within Modern Art in which the role of forces we cannot easily describe is given its due; namely Surrealism, and its practice of ‘automatic’ writing, drawing and painting: ‘I am an automatic crystal painter’ says Holzwarth. In automatic painting the artist relinquishes conscious control through altered states, closing off the will, suspending any thoughts of a desired outcome or useful purpose. This does not mean there is no control. It means that control is surrendered to another order, another plane of existence.

The use of materials with mystical and ritual significance does not stop there. Slightly more conventional, but still unusual, is her use of hot wax as a kind of paint. As a painting medium hot wax (called ‘encaustic’ in this context) has a considerable heritage, from the Fayum mummy portraits of Coptic Egypt 2000 years ago, to Jasper Johns’ target and flag paintings of the late 1950s. In both cases the wax medium was valued for its translucency and for its instant hardening, allowing a quick, improvisational, painting process. The standard approach would be to apply the melted wax with a brush from a pan or kettle over heat, but Holzwarth uses the wax dripped directly from the candles with which she surrounds herself whilst painting. This pursues the materiality/spirituality dualism evident in her use of crystals. The wax candle has both practical utility and sacred significance. In her series of tondo paintings entitled ‘causal plane’ (2016) the dripped wax finds its own level, its own material nature, settling in pools, growing like low stalagmites. In some works the circular support is echoed in the whirlpool trails of pale, whitish, wax. It’s rather like looking at the activated atmosphere of a detail in a Turner painting – spume and fog and smoke.

It is important here to note, too, the fact that these works belong to series: Holzwarth imbues all aspects of the work with meaning. She favours the square and the circle (tondo) for her supports. The works always arise in series of nine, and the dimensions of all works are in nines or multiples of nine. (The number nine, in many cultures, in many sets of beliefs, is sacred.)

The spiritual dimension of Holzwarth’s painting may not find ready favour with some art historians and critics in this sceptical, secular, Western culture, but art history, like all history, is subject to revisions.

And a revision now in progress within this shifting cultural climate is an addition to the list of those canonical pioneer figures in abstraction. Beside the names Wassily Kandinsky, Vladimir Malevich and Piet Mondrian, another name has appeared – Hilma af Klint pursued a traditional education at the Academy of Fine Arts, Stockholm, but the source of her abstract paintings, some executed as early as the turn of the 20th century, cannot be understood, in standard art historical terms, as a development of Cubism, because those earliest works predate that movement (and, anyway, she seems, throughout her life, to have disregarded current tendencies in Modern Art). She was a dedicated Theosophist, and her abstract paintings were executed, she said, under the direct guidance of the ‘High Masters’, the spiritual entities she contacted through meditation. Her late, and still not complete, addition to the list of canonical pioneer figures may be ascribed in some degree to her gender, and also to her cultural and geographical isolation from the mainstream of Modern Art, all conditions outside her control. But the principle delay was one she controlled entirely. She made her living as a painter of landscapes and still lives, but she kept her abstract paintings a secret – even after her death. She died in 1944, and in her will stipulated that they may not be made available to the public for 20 years. Even then, recognition was slow. And still, today, the idea of an artist motivated, inspired (in the fullest sense), by matters of the spirit, remains slightly indigestible to contemporary sensibilities.

Which brings us back to Annette Holzwarth. Here is a growing body of work in which binary opposites are reconciled, dualities are resolved – the corporeality of paint and mineral matter becomes the vehicle for the extramundane, the occult, the ethereal. The physical act of painting creates a portal to the ether...

“The image is at once one of liberation, of disinhibition, and of a deep, occult, order. The tradition it invokes is one in which painting is not simply a practice, but an act, a kind of invocation.” 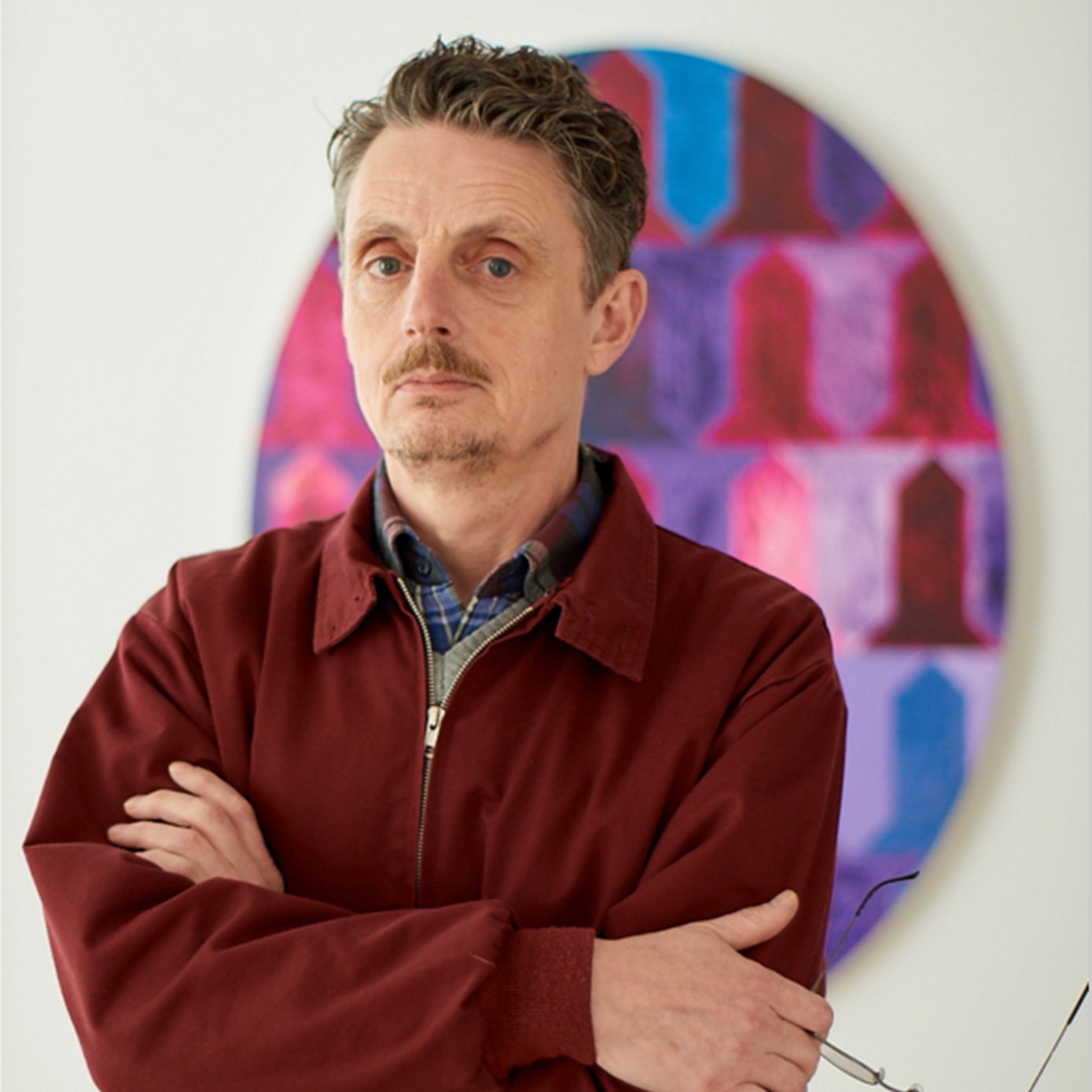